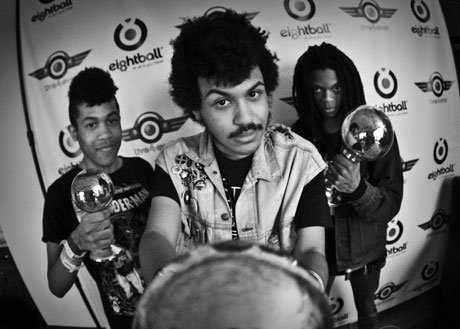 What is punk nowadays anyway?

Just a throwaway tag for any band with pointy, gel-encrusted hairdos, and trousers that refuse to say hello to a faraway striped-socked ankle? Or anything just that bit too quick, that bit too loud, to be labelled ‘indie’? What is indie nowadays anyway..? Probably best to leave that for another time and place.

If what first started rushing out of the doors of New York nightclubs, and from an expanding London pub scene in 1976, came shuddering to a miserable end before it was barely out of nappies, its most famous protagonist staring into middle distance on a dank San Francisco stage, feeling cheated by the world, then surely there can’t be any authenticity left, nearly four decades on from an untimely demise.

Well, Missouri brothers Dee, Isaiah and Solomon appear to be navigating that particular problem by coming up with a new definition all of their own.

“We listen to all sorts of stuff,” Radkey told us during an exclusive interview at March’s South By Southwest Festival. “From Devo and Depeche Mode to Blondie and Ramones. And we’ve been getting into Black Flag actually; we were touring England and our buddy Tom played ‘Nervous Breakdown‘ – we were like, ‘Wait this is awesome’.”

With Radkey there’s certainly no spikes or peroxide going on. Instead, shoulder-length dreads whirl and propel the sound of most recent EP ‘Devil Fruit‘; tracks such as ‘Out Here My Head‘ and ‘Pretty Things‘ careering along at a pace that’s all very Ramones right enough, yet the meatier main course of ‘Red Letter‘ especially starts to hint at US hardcore, while the EP as a whole – apart from the very occasional tantrum here and there – is delivered with an almost laid-back croon that gradually, but very noticeably, removes the band from any more of those immediately obvious comparisons.

That’s quite a niche to have made for yourselves, just a couple of EPs in and not all that long after the brothers were first introduced to the world of rock thanks to their father’s record collection, and after professional music lessons were ditched in favour of that most punk of pursuits: D.I.Y. – as they tell us during our SXSW video interview below. We’ll also hear how attention is now turning towards crystallising all that lies ahead in our chat into a full length debut album; their first record is likely to include songwriting contributions from all three members – something which came as a bit of a surprise. It’s amazing what a good pizza can inspire though.

Those British crowds got their first taste of Radkey late last year when they set off on the road with fellow sibling rockers Drenge, discovering kindred spirits in the process as two of our youngest, but most exciting torch bearers set about returning rock n roll to the masses. “It was long, but it was cool,” they tell us. “We got to see a lot of the country, and Scotland. We like to think there’s a cool wave of new bands playing rock music coming out and it’s really cool ‘cos they’re like partners. We wanna bring rock music back up front and it’s good to have other bands do that too.”

Other parts of Europe have also recently had their first introduction to Radkey, as did Japan at the end of March – an experience which the band were clearly going to savour. “We’ve been to Germany and Holland, that’s it so far. It was cool – Germans dig their rock music. And their sausages. Isn’t David Hasslehoff really big over there also? We get a week-and-a-half off and then we’re going to Japan. We’re going to do this festival called PUNKSPRING. It’s going to be awesome.”

It’s clear things are really starting to move now. Songs are already having to be discarded in favour of each new step forward, stages becoming ever bigger, all creating their own dilemmas along the way. “There’s a few songs we have to drop from the set now, but we still play them every once in a while,” they reveal. “We don’t play ‘Mind Ride’ very much anymore. It’s not available, it used to be. We used to put out these blank discs and we’d just put the mp3s on there and it’s some of our first recordings ever. So they’re around, maybe on the Internet somewhere if someone wants to dig that deep. Or look around Kansas City, ask someone, maybe they’ll have that disc.”

“We dig a nice club, ‘cos then it’s big but still not too big, and then the energy just goes,” they continue on the subject of stages. “We toured with Black Joe Lewis who played places like the El Rey which is huge and still awesome so you can’t complain either way, it’s all great.”

As with all new bucks in this digital 21st century, there’s another dilemma which cuts to the heart of how success should be judged. LA mansions, private jets and sold-out stadiums? Or, like the punk pioneers which have gone before them, just the thrill, the barest satisfaction, of living a simple life through music? Radkey know exactly where they stand.

“If we could give the music away for free forever that would be ideal, but it’s just, y’know, the food…we like to eat! So yeah we love the idea of the music being spread and everyone being able to listen to it whenever they want, that’s awesome, but if you really like the band you should maybe buy it every once in a while at least – give them some sustenance…keep them alive!”

What is punk nowadays then? Probably nothing worth mentioning. Long dead. A meaningless industry label merely still around to be preceded with ‘pop’ or ‘skater’ or ‘surf’ or whatever else takes fancy inside the brainstorm of some brightly lit, gold-disc adorned basement office.

So what? You can bet by the time Radkey’s debut album does come along no-one will give a shit anyway. Because in the hands of this band, punk doesn’t have to be all that. Against all the odds it can remain exciting, and urgent. Most importantly different, something all of their own making.

Whatever it is these days, thanks to these boys it’s alive and still very much kicking.