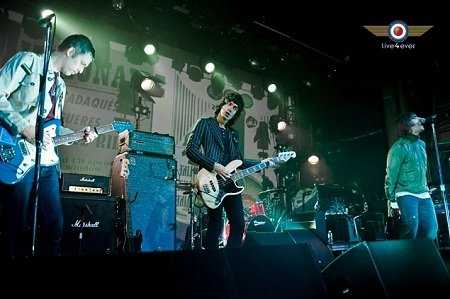 Quest Management’s Scott Rogers has told Music Week he believes the album currently being recorded by Beady Eye with their new producer Dave Sitek is ‘probably the most exciting record’ he has been a part of for ‘as long as he can remember’.

Beady Eye’s debut album ‘Different Gear, Still Speeding‘ garnered a generally positive response from critics of the ‘better than was expected’ variety upon its release last year, but often found itself wallowing in mid-paced, uninspiring rock despite one or two outstanding highlights.

However, the band’s decision to record the follow-up with Sitek – lauded for his work with TV On The Radio and the Yeah Yeah Yeahs – suggested a desire for something different amongst the former Oasis members this time round, an approach now apparently confirmed by Rogers.

“It’s probably the most exciting record I’ve worked on for as long as I can remember,” he has told Music Week. “Everyone thinks they know exactly what record Beady Eye are going to deliver, but they’ve completely turned it on its head.”

“I think Liam Gallagher is making the best album of his entire career. That’s a big statement because he’s made some classic records – usually with his brother’s songs. But Beady Eye are very talented players and writers and are technically fantastic.”

Rogers also outlined the impact of Sitek on the sessions, and revealed the producer jumped at the chance to work on the album with Liam Gallagher, Gem Archer, Andy Bell and Chris Sharrock after being sent a selection of demos.

“I sent him the demos and a link to the studio after being told he’d never leave his LA home. He gets straight back to me to say ‘I’m there’,” Rogers continues.

“They tracked 21 songs in nine days. Sitek called at 6pm the other night to say, ‘I need a brass section. Get me a brass section now’. Everyone in the building was calling to sort it for him, and we did – within two hours it was recorded.

“It was a track that was never going to make the album, but Sitek completely changed the vibe and now it’s an amazing song.”