Home
Future
Review: Eugene Twist – ‘The Boy Who Had Everything’ 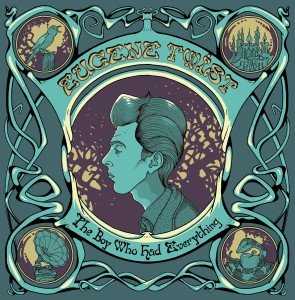 Even the great first records tend not to stretch the artist’s artistic license too much, but in just eight songs which comprise Eugene Twist’s debut ‘The Boy Who Had Everything’, a heady fusion of blues, jazz, 50s rock, soul, psychedelia and pop marks the 25-year-old musical polymath as a true original.

While the musical landscape often seems awash with singer-songwriters, one hasn’t truly washed up on the mainstream since Jack Johnson tumbled into the charts bearing Banana Pancakes and a surfboard. Which isn’t to say there hasn’t been some excellent ones along the way – Cheval Sombre and Adrian Orange spring to mind – it’s just that their avowed loyalty to the familiar folksy themes means you know what you’re getting the moment you pop their CD in the car stereo.

Glasgow’s Eugene Twist is different, and ‘The Boy Who Had Everything’ combats the singer-songwriter stereotype while barely clipping a run-time of 30 minutes.

‘If There’s Love Where I’m Going’, the opener, rollicks out of the speakers like a wicked amalgam of the original Batman TV show theme tune and ‘Our House‘-era Madness, before morphing into a lush and mellifluous pop song that segues into a lively sax solo. The chorus, meanwhile, is as sweet as honeysuckle, with backing vocals that give the track a real summery edge. And while the music is decidedly unpredictable, the lyrics follow suit; with Eugene singing ‘Climb out your windows, children, coach is set to go/For the open day at Roswell and the field trip to Guantanamo.’

Exposed early to influences as diverse as Leonard Cohen and Buena Vista Social Club, Eugene twins a deep-rooted pop sensibility with a boundless creativity, whether he’s playing guitar, drums or penning infectious lyrics. ‘It’s Down To You’ lazily shunts into life in comparison to the opener, but Twist’s smoky drawl and the track’s assured instrumentation guarantees the listener’s attention is never lost. Again, the lyrics impress. Just savour this one: ‘When the words are haunted by the ghost of a silence you’re shackled to/ I can sense that moving on is the comfort that could take too long.’

The eponymous track three on this self-produced debut is among its high points, the kind of tune you’d expect to find on a Tim Burton score as sung by Tom Waits or Nick Cave – a gnarled, gothic mash-up of guitar and piano, stippled with lyrics that are entirely open to interpretation.

‘Tough Act To Follow’, meanwhile, has Twist in full Bob Dylan mode, with a dreamy arrangement and homespun lyrics. ‘You’re nobodies to keep/ But you’re always within sight of your shepherds and the sheep,’ he muses archly, before ‘Talk of Roses’, which seems by far the most lyrically complex on the album, opens on a sharply-picked acoustic guitar. A poppy ballad, it drifts darkly to an atmospheric conclusion and the bitter refrain, ‘There’ll be no talk of roses/ For they’ll have all been drowned.’

‘Gaugin’ sounds like The Beatles or the trippy garage rock of Arthur Lee’s ‘Love‘, with a touch of The Coral thrown in for good measure. But here’s the thing: Eugene Twist sounds like Eugene Twist. Far from entertaining notions of Xeroxing or copying what has gone before, there is always a strong emphasis on originality as he slipstreams into different genres and time periods. Sure, there are stylistic comparisons to be made – the supple ‘Three Dear Words’ has an old world quality to it, a 50s innocence that recalls Buddy Holly and The Picks (Eugene’s ‘Picks’, incidentally, include Nicholas Blythe, Ben Sinkie, Josie Doherty, Matthew Mullan, Mike Brogan, Stevie McHard and Gordon Turner – all of whom deserve credit for their instrumental work on this record).

Sombre album closer ‘Actress On A Mattress’, with its plaintive cello and becalmed digression on those moments that seem to last a lifetime, dissuades comparisons, so touching and anguished as it is.

Analysing this debut is akin to contemplating a collection of linked short stories or an exhibit of paintings, such is the depth of emotion in these songs. ‘Actress On A Mattress’, for instance, tells the story of a moment shared between two cross-purposed lovers, while ‘Talk Of Roses’ might be about the island of Atlantis (talk of ‘strange, distant lands’ and ‘Cast into the ocean to emerge among the clouds’) or something else entirely. The music, meanwhile, is pensive and heartfelt, but by turns poppy, rocking, and melodious.

At just 25, one senses there’s a heck of a lot more to come from Eugene Twist.

Get on the bandwagon now.