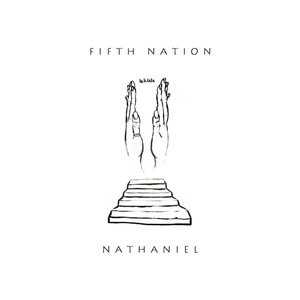 Fear not, this isn’t the return of Little Britain’s Dennis Waterman caricature. Simply a condensed and abridged version of how Fifth Nation’s second full length album came to fruition.

The Brooklyn duo have actually been around for some 3 years now, but thanks largely to their natural inclination to tour only on their native side of the pond their name is still met with shrugged shoulders and raised eyebrows whenever it is uttered by those in the know on these shores.

More’s the pity for the United Kingdom, for when the word is spread, you can bet your bottom dollar these two are set for big things.

‘Nathaniel’ may just be like no album you have heard before. An authentic labour of love, lead singer and guitarist King Julia and equally ludicrously monikered drummer Musik Read are partners in both the creative and romantic sense of the word, and the colossal amount of effort they so clearly devoted to every aspect of their latest output makes it difficult to doubt their authenticity. Whether they have been turned down by record labels in the past or purely wanted to push their unmitigated talents to the absolute limit is unclear, but it works.

The band tout themselves as a ‘soul rock’ act but to pigeonhole them into one category would be an injustice. Imagine The White Stripes had Meg stepped out from behind the drum kit, replaced by her partner in crime of course, strapped on the guitar and taken on vocal duties to reveal an ability to consistently churn out some truly majestic riffs and a formidable set of rock and roll pipes. When her hands start to get tired, she takes it down a notch and concentrates instead on showcasing an awe-inspiring, soulful voice.

In essence, this is in fact how ‘Nathaniel’ unfolds. Opening gambit ‘Gold Rush’ is a rapturous call and response stomper that is guilty only of deceiving the listener with an uncharacteristic explosion not quite in keeping with the tracks that follow. Lead single ‘No Woman Is A Rock’, for example, portrays the band’s more bluesy leanings, whereas ‘In My Room’ is a refreshingly different take on archetypal R&B by numbers.

Arguably Julia’s finest moment of individual merit comes in the beautiful and haunting tones of the mournful ‘Never Alone’, a track that conveys anguish, pain and hope more poignantly in three and a half minutes than many others that spring immediately to mind.

The record twists and weaves its way through a labyrinth of genres, ensuring the band are fundamentally impossible to tie down to one specific category, all the while maintaining that new groove Brooklyn swagger made famous by a certain miss Debbie Harry and her Blondie cohorts some 35 years ago.

It’s hard to believe that Fifth Nation have managed to keep relatively off the radar for the best part of three years, but in ‘Nathaniel’ they might just have written, recorded and produced their own ticket to bigger things.