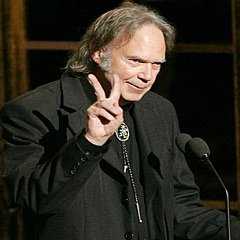 Neil Young has been speaking of his admiration for bands such as Mumford & Sons and My Morning Jacket, but has bemoaned the lack of sound quality in modern day recordings.

“Mumford & Sons and My Morning Jacket are great bands,” he told MTV News. “I love them both and I know them well. I feel good about saying that.”

However, during the interview Young also admitted he is ‘having trouble’ with the sound of 21st century, digital recording techniques. “I’m finding that I have a little bit of trouble with the quality of the sound of music today,” he said.

“I don’t like it. It just makes me angry. Not the quality of the music, but we’re in the 21st century and we have the worst sound that we’ve ever had. It’s worse than a 78. Where are our geniuses? What happened?”

Neil Young released his most recent studio album, ‘Le Noise‘, back in 2010.