Live4ever  was delighted to catch The Clash legend Mick Jones in Liverpool, appearing at the city’s recent ‘Don’t Buy The Sun’ concert.

Live4ever asked Mick about the gig and his affinity with Liverpool, as well as his connection with Taurus Trakker, the duo consisting of his cousin Martin Muscatt and Alison Phillips, with whom Mick has played live and appeared on their second album ‘Building Ten‘. 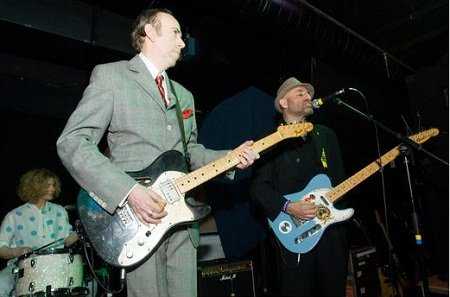 First off, the Don’t Buy The Sun concert – I get the feeling this is something you really wanted to be involved in.

Oh yes, it’s a privilege and I’m very proud to be associated with the people of Liverpool. We’ve played here ever since the punk days, and Eric and I remember some of these guys like Pete Wylie from back then, but I also really loved The Beatles and that was my first big connection with the city. Both causes tonight are very much something I feel strongly about and wanted to be part of it and it’s been really great.

A lot of people are very happy you’re here tonight and supporting this, especially the artists.

Well I’ve been lucky. I’ve been taken in by those guys (Pete Wylie, The Farm, Ian Prowse etc) so they’ve welcomed me in, you know what I mean. Even though I’m not a scouser, seeing it from my eyes it’s very special. As a Londoner not many like me get the chance to experience that on such an emotional level. But what’s important to me is to carry on what we started back in the punk days and stay true to what we did with The Clash, and there’s no better place for that than Liverpool for people standing up for their rights and that there is my true connection with the city.

The recent tour with Big Audio Dynamite has had fantastic reviews, but how’s touring these days compared to ’76/’77 for example?

The older you get the harder it gets, but the more you appreciate it. You do it because you know it’s what you enjoy the most, I was born for this to tell you the truth and it was all I ever wanted to do really. I remember going to the careers officer at school and being asked what I wanted to do, and I said I wanted to be in a band and they said they couldn’t help me. All I could do was civil service work or the armed forces, they said, “that’s all we have, so good luck to you but we can’t help you in any way,” (laughs), but I always knew what I wanted to do.

So you were quite driven as a kid?

If you believe enough, and are righteous enough and don’t give in you can do it. Everyone who does go forward and makes their dreams come true. it’s a great example to others, and it’s funny because we always got so much criticism in The Clash, but we always thought you should be happy. We’ve gone a long way and it represents what you can do, I come from the flats you know what I mean, and we took it all the way to Broadway and that means something.

Earlier this year I came across your cousin Martin’s band Taurus Trakker, whose album you’ve just played on. Rock ‘n’ roll is obviously something that runs in your family.

Well, we all come from a pretty big family of Jewish immigrants that at the turn of the century were escaping Russia and settled in London, so there’s quite a lot of us. Martin is my younger cousin and the first thing I can remember him being around is back in The Clash days – a football game he organised with the kids from the estate versus The Clash around 1978, which was great fun.

Martin Muscatt: Yeah I was working as a play leader (youth worker) on a adventure playground in Camden actually, and some of the kids were only a couple years younger than me, so I fixed it for The Clash to come and play a match against the kids. The whole estate turned out to watch, Joe was in goal wearing his engineer boots and Elvis T-shirt, my girlfriend at the time at the time took a load of photos and I had them enlarged and now they are a part of Mick’s rock ‘n’ roll library. Mick and I come from a large extended family with a lot of musicians and artists. Mick’s grandfather was a ballet dancer, which was unusual for a working class man, and his mum was a also a professional dancer as well as a family band in Ladbroke Grove in the 1940s. Nowadays there’s our cousin Andre who was in BAD, and my daughter and Mick’s both sing, so yeah it runs in the family alright.

Tell me about the new Taurus Trakker album Martin, where did you get that name from?

Martin Muscatt: The name came from reading Bob Dylan’s Chronicles; he mentioned a gun he once owned which was a Taurus Trakker. The band is me and Alison, she came up with the idea of using two Ks so when you Google it you don’t get a list of guns coming up. The name of the album is called ‘Building Ten’, which is named after the track Mick plays guitar on, and with the added saxophone and some amazing vocals it’s sounding really good. It took a year to put together but it is well worth it.

The album’s sound is rocking guitars, a fat bass and lyrics that reflect the experience of living in London. Influences are Mott, The Clash, The Who, The Stooges, you know the classic bands. TT is a positive statement against the increasing corporatism of our culture which Alison chose a quote from Niche to sum it up: ‘If you light a fire for others, you will brighten your own way.’

Mick: I played guitar and bass on the record and it was great fun, though I’ve always been a big supporter of the band all the way along the line, and to work with Martin and Alison is something I really enjoy. Martin’s great because he’s about something, you know what I mean, his material is about something and that’s what I feel is really important these days. I hope it does well and wish him every success on it, today being in a band is a long road and you have to keep with it, keep going.

What’s a Taurus Trakker gig like, and will you be getting up with them again Mick?

I’ll play with them yeah, I’ll play if I’m around because it’s been a busy last two years with BAD and the tour, but I always love to play. That’s the best fun still to this day for me and it’s something I enjoy, playing with Martin and Alison, I love the band and playing in TT for me is great fun.

Martin: Mick always brings a positive ingredient to everything he touches, thinking outside the box with his own special sense of humor. But you know he’s a very busy guy, but maybe he will jump on there with us again some time soon. That’s part of the whole vibe – keeping it quiet to the last minute, the audience never know when he might turn up, and neither do we.