Home
News
Review: Kings Of Leon – ‘Back Down South’ 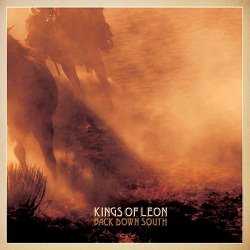 Veering away from the middle of the road for four glorious minutes, Kings Of Leon‘s latest single ‘Back Down South‘ offers a tantalising glimpse of what might have been had, sometime around the end of 2007, the Followill clan set their sights on maturing their sound, rather than their bank balances.

The journey back to the country, complimented by violins, twangy guitar licks and a handclap conclusion, instantly brings to mind that modern classic of a second album ‘Aha Shake Heartbrake‘; it should be impossible for anyone familiar with that record not to spend some time with the track and have a rodeo and glitterball being recalled with a smile. For one all too fleeting moment, the Radio 1 playlist obsession which has dragged Kings Of Leon into Nickleback and Bon Jovi territory these past few years is almost forgotten.

If ‘Only By The Night‘ saw the band setting up camp in a disposable, mainstream rock home, ‘Come Around Sundown‘ had them installing a new double garage and conservatory. Yet, in the midst of all that, ‘Back Down South’ claws its way out and finds Caleb Followill offering us a different reality; a reality in which Kings Of Leon allowed their sound to grow, and allowed their ambitions to grow, without compromising any of their early promise.

Where breakthrough commercial singles ‘Sex On Fire‘ and ‘Use Somebody‘ came about through a Rock Anthem computer programme, ‘Back Down South’ instead has its own power, its own grandeur, and its own sing-a-long quality without dipping its feet in tired rock cliches, and is uniquely Kings Of Leon.

Like the best of Caleb Followill’s early work, the lyrics are an insight into a mindset, into his world, telling the tale of a lost night between two lovers, evoking a story of both longing and separation which could apply as easily to a much-missed childhood as it could to a much-missed girlfriend.

Ultimately, ‘Back Down South’ isn’t just a nostalgic ode to home and to early influences, but to a time when Kings Of Leon made great records, made interesting records, and stood out from the crowd through their unkept hair and budget spectacles.

Today, they look out to the crowd awaiting the latest radio hit, but this single proves, now all too occasionally, Kings Of Leon are still able to find their clouded inner beauty.