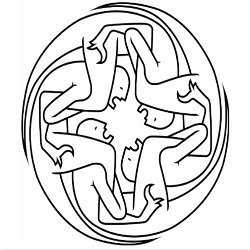 The biggest hurdle most bands face in their careers is trying to better their debut album or at the very least match it. After all, you have a lifetime to write your first record but about six months to write the follow up – at least if you want to keep up the momentum.

There aren’t many that can say they’ve had to face the problem of topping their third album. Kasabian are one of those bands. ‘West Ryder Pauper Lunatic Asylum’ did for Kasabian what ‘Screamadelica‘ did for Primal Scream in terms of musical fulfillment. Granted, they were already pretty damn successful, but that record catapulted them to the next level. It may not have had the same level of impact as ‘Screamadelica’, but it mirrored the change in Primal Scream’s career, whereby musically everything came together on their third release and they went massive; finding their sound and making an album they’d been gradually working towards since their conception.  It was the complete Kasabian album.

The band have described their new material as being ‘heavy as ****’. On the basis of what we’ve heard so far – ‘Switchblade Smiles‘, live recordings of ‘Velociraptor‘, and now ‘Days Are Forgotten‘, it remains to be seen if the new album will indeed be any ‘heavier’ than their previous work. These songs suggest that Kasabian haven’t shaken things up too much but have, as with every album, taken a step forward.

‘Days Are Forgotten’ tears through the speakers with a riff that resonates of Muse’s ‘Supermassive Black Hole‘. There are backing vocal screams which look set to be a reoccurring theme on the new material, screams that when played live should give the track that extra ingredient to ensure the crowd goes absolutely apeshit.

It bounces along with a rhythm akin to ‘Underdog‘ and is pumped full of that standard Kasabian swagger and attitude that bleeds through in their lyrics, which have an ‘us against the world’ feel that much of their best work shares in common with. “I am taking back what’s mine, I am taking back the time, you may call it suicide, but I’m being born again, I’m waiting.”

Slotted in as the second track on their new album ‘Velociraptor‘, it joins a family that represents some of Kasabian’s finest moments – ‘Processed Beats‘, ‘Shoot The Runner’ and ‘Where Did All The Love Go?’ – all of which are the second tracks on their respected albums. How does it stand up against these classics? Well, it holds its head high but it’s still having to tip-toe just a bit to avoid inferiority. Coincidentally, it sounds very much like the love child of an ‘Underdog’ and ‘Where Did All The Love Go?’ mash up, as the chorus shares a similar feel to the one in the latter track.

As it stands at the moment, they’ve got one hell of a mountain to climb if they want to overshadow the brilliance of their last album, which boasted the stadium shaking ‘Fire’. They’re not reinventing the wheel with this one, but it is certainly a solid effort that deserves its place on a new Kasabian album.