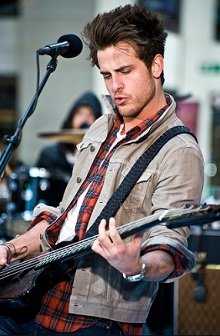 Kings Of Leon have said their experiences in the band, documented in the new film Talihina Sky, has directly mirrored the story of the seminal fictional group Spinal Tap.

Speaking to BANG Showbiz, bass player Jared and guitarist Matthew Followill praised the film’s actors’ ‘perfect’ performances, which they say is ‘just like’ the early years of Kings Of Leon.

“Oh, we are Spinal Tap, totally, I don’t know how they got that film so perfect,” said Jared, while Matthew added “You’d think the actors were in a band, maybe they were in a band before, they nailed so perfectly, it was like the beginning years of our band.”

“Spinal Tap was a huge downward curve the whole film, and when you’re in a band coming up you see the same people and go through the same venues and have the same complaints, it’s really funny,” Jared continued.

Talihina Sky is to be premiered at 150 cinemas across the UK from June 25th.