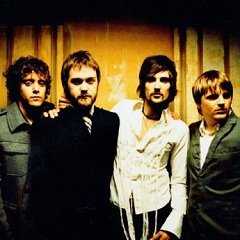 Pizzorno made the admission to the Daily Record newspaper, explaining how an early interview with the actor planted the idea for the track.

“I was watching an interview with Morgan Freeman,” he said. “It’s from the fifties. It’s someone who looks really cool but underneath the smile there’s madness going on there you don’t want to mess about with. On the face of it, the guy has a killer smile and you keep away from that dude.”

‘Switchblade Smile’ is the first song lifted from Kasabian’s forthcoming new album, and will receive its premiere on Zane Lowe’s Radio 1 show on June 7th at 7pm.

Despite the anticipation being felt ahead of their new release, following the commercial and critical success of previous effort ‘West Ryder Pauper Lunatic Asylum‘, Pizzorno has shrugged off any added pressures, claiming the album was written in ‘three or four months’ and is the best they have ever done ‘by miles’.