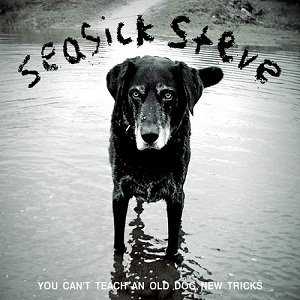 It could be said that Steven Gene Wold is a guy who has risen from the very bottom of the barrel, right the way to the top of a musician’s game – by anybody’s standard. But what a search engine, or perhaps some article dubbed as from the streets to the charts might define as the ‘bottom’, is really just a colourful and at times surreal background.

In order to reach his knee-slapping, boot-thumping, string-twanging rockabilly status that the world loves and recognises today, Seasick Steve has had to live through various incarnations as a hobo, tramp, worker, bum, hobo again, and had to travel on a hell of a lot of boats to get there.

Once the record companies caught sight of Steve’s wood-chopper style beard, trucker style cap and dungarees matched with plaid shirts, they listened to his songs about life as a down and out – and the whiskey he washed it down with – and turned him into an epitome of a kind.

But behind the Seasick Steve the music business has branded with anchors, swallows, bourbon bottles and treasure chests in the name of a ‘this is me’ identity, is a man who is all of those things but in spirit and honesty and not in commercial value.

Steve left home at 13 and lived rough, travelling by freight train until he started touring as a musician. He learnt to play guitar at the hand of a man called K. C. Douglas who worked at his Grandad’s garage. Eventually, he fell in with people of the scene such as Janis Joplin and then went on to become a studio engineer, befriending another icon from the 27 club, Kurt Cobain. After that he absconded to Europe, living in Paris for a short time and then moving on to Norway. It was during this spell where he set the motions rolling as a confirmed musician. To cut a long story short; he has a lot to sing about.

Four studio albums down the line, ‘You Can’t Teach an Old Dog New Tricks’ has been released on the Jack White label Third Man Records in the US, and London based independent record label Play it Again Sam in Europe. We’re presented with twelve tracks of super-charged uber-cool groove, to points where Steve calms down to deliver soulful and really quite romantic sentiments.

The album opens with a ‘Treasures‘; a soft forlorn ballad depicting the importance people lay on material treasures, and a judgemental society that has turned its back on those who have no notable belongings of value. The strings involved put the finesse on the melancholy of this Cash-esque wonder.

‘Burnin’ Up‘ is a feverish offering harkening back to the days of original rhythm and blues, ebbing inoffensively before the pace quickens and the intensity rises in true Seasick style. ‘Don’t Know Why She Love Me But She Do‘ surely could have been given a shorter title especially for such a snappy number, and plays almost as a barn dance.

Mid-album track ‘Whiskey Ballad‘ was written by Steve’s son Paul Martin Wold, and after beginning with a refreshed ‘aahh’ of Steve supposedly taking a sip of the spirit it goes into a chirpy ditty reinforced by a whistle. It’s the kind of song you’d expect to hear from a decked porch from someone swinging on a bench seat by the Mississippi. It paves the way to ‘Back In The Doghouse‘, whereby Steve busts out his three-string trance wonder guitar for this Bo Diddley style track of gutsy temperament.

The tone is lowered once again when ‘Underneath a Blue and Cloudless Sky‘ restores a poignant stirring emotion. A serenade of vows, promising to pass the years until the implicated beloved’s ‘hair turn grey’; intertwined with visions of vast corn fields and endless skies. Very likely a sentiment written for wife Elisabeth.

‘Days Gone‘ is another song pacing almost schizophrenically between quiet and explosive, the hook arriving abruptly with Steve seemingly adopting a couple of personas, voicing orders and obeying them in succession.

The final track is a reflective sing-a-long entitled ‘It’s a Long Long Way‘. It effectively evokes a folksy feel played on an ordinary acoustic guitar; capturing the simple and traditional essence of the song perfectly. The album ends on a reminiscent note confirming the idea that Steve has journeyed long enough to have earned the wisdom of a guru.

All in all the album transitions through enough diversity to make it a worthy addition to anyone’s music collection. However tracks such as ‘Have Mercy On The Lonely‘ and ‘What A Way To Go‘ may come across as lesser significant versions of other options available on the same CD, and are perhaps destined to be the skippable options. Fans are going to rave about Steve’s progression over the last decade – and the journey isn’t over yet.