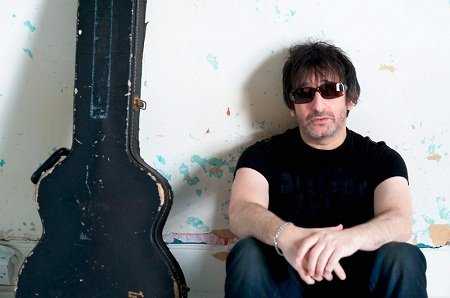 Not long after their co-headlining performance at the recent Friends Of Mine Festival, Live4ever caught up with Lightning Seeds frontman Ian Broudie to discuss the shift away from being just a ‘studio band’, the constantly evolving band line-up, and of course, that football anthem.

21 years of Lightning Seeds, though you didn’t start playing live with the band until ’94. Was the band originally put together solely as a studio band?

Well by that time I’d been in a couple of bands playing at Eric’s and Big in Japan, stuff like that. But I came to realise after producing Echo and the Bunnymen, the first production I did, that there was a lot of sitting around being in a band, but in the studio you’re working with music everyday, so I turned my hand to producing.

But again, after a while I thought ‘I’m a songwriter and always writing songs and I want them to come out’. It was a chap from a band called Pale Fountain who I was producing a track for and he said if I ever wanted to do something with the songs I had put together he would be interested in getting them out there. He didn’t have a record label or anything and I did mostly at home and when I’d finished I didn’t think that many people would be interested if I’m going to be honest, I suppose I didn’t have the confidence really and I wasn’t in a band but I did want to put my music out and get it heard.

I recorded it in a place in Kirby at night because the studio was cheaper, and that’s where the first album was put together. We pressed up 200 copies of the single ‘Pure’ but it kept selling out and after about six months. We started getting radio-play, plus ‘Pure’ was getting regular play at the Hacienda as tune at the end of the night. Eventually it got on major radio, but originally I wasn’t looking past pressing up 300 copies, but it gathered momentum really quick and all started from there really.

So 17 years touring and playing with the Lightning Seeds, that’s quite some time, has it gone quick?

It hasn’t been 17 constant years of touring, there’s been sort of six and seven-year gaps, like when I did the ‘Tilt’ album around ’99 I stopped for a long time and went back up to Liverpool and started working with some unsigned band,s and that went on for a few years, bands like The Zutons and The Coral.

Fair to say you were quite instrumental with the local Liverpool bands back then – like The Zutons and The Coral early on in the careers?

Yeah, as you say it was early on before any of them had record deals, over a course of three-four years I helped them to develop in rehearsal and in the studio so you know, really liked what they were doing and felt quite close to it all and thought maybe there was a part for me to play in it.

Would you say if it wasn’t for ‘Pure’ taking off you would have been happy to carry on prominently as a producer, as you had already been in a successful band with Big in Japan?

Well, with Big in Japan, though it’s lasted within folk-lore we didn’t really do that many gigs, probably about 25 and most of them were Liverpool, with Manchester, Leeds and one in London I think, so I still had that wanting to write and put songs out, but maybe I felt that my chance had past a little but no, I’ve always wanted to put my music out.

The line-up in The Lightning Seeds has changed quite a bit over the years with drummers like Zak Starkey and Chris Sharrock, can that be a problem sometimes, or is that the way the band works?

The line-up is the same if I can keep it that way, but if Angie, the keyboard player, or Martin, who plays the bass, can’t be there I’ll put someone in and generally it’s a friend like Shaun who plays drums or my son Riley who plays guitar, but I try to keep it the same line-up if I can.

Sometimes it’s harder for, say the drummer who’s coming in to replace Zak or Chris, and having to learn the parts, but it’s not about being good or bad it’s about fitting in. But then the band has always been just me really, because The Lightning Seeds have been a studio based thing as I’ve always loved just being in the studio and experimenting and feel very at home there.

Really enjoyed your set today. Do you look forward to playing live and getting out the studio?

Funnily enough after all this time I’m starting to feel comfortable playing live, but I never did and would get very nervous about it. I never started playing live until the third album ,’Jollification’, and at the time I was writing a lot with Terry Hall and he helped me get out there by saying, “tell you what, why don’t we do a couple of co-headline gigs and you can do a couple of numbers with us then take over?” and when you’re there, seeing your mates playing and egging you on it helps you a great deal and it gave me the nerve to get up there and play.

I can be the guitar player no problem, and I’ve been doing that in bands for a bit, but singing my own material was a bit different. As I say though it helps when you’re playing in a band with your friends and they’re good musicians, like I used to love watching Chris on drums and having him up there would fill me with confidence to play.

The Lightning Seeds have made some great singles over the years, ‘Three Lions’ was massive, how does it feel 15 years on from it all?

Yeah, probably the song the band are best known for and I wouldn’t swap it for the world, though you find some bands have a funny thing about their most successful song for whatever reason. But yeah, though there’s always been this thing to write the latest football song, they rarely go on to do anything, but the New Order tune showed that you could do a football song and it be OK.

I never sat down to write an anthem and there was really no pressure on me to do so, but at the time I’d been watching Fantasy Football and felt those two fellas (David Baddiel & Frank Skinner) very much connected with the game around that time so I asked if someone would get in touch and ask them if they would get involved, and without them I probably wouldn’t have bothered. I had a melody kicking about and thought it would just fit, and with David and Frank we came up with ‘Three Lions’, around that time it was really exciting with the Euro Finals, and the song just seemed to hit the spot.

Though it’s our biggest song I don’t play it as part our set, except if it’s an occasion that fits the song. I see it as like singing Christmas carols when it’s not Christmas, but if there’s a World Cup on or something I’ll always play it. Though you might think some of the crowd would be expecting to hear ‘Three Lions’ hopefully when they hear our other stuff like ‘Pure’, ‘Lucky You’ and ‘You Showed Me’ they’ll think “I remember that,” and “I know that one,” and usually it’s all OK.

Tags:carl stanley, The Coral, the lightning seeds, the zutons