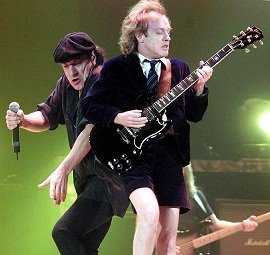 Now, guitarist Angus Young has re-affirmed his band’s commitment to keeping their music away from official outlets, saying he is intent on preserving traditional record-listening habits for as long as possible.

“I know The Beatles have been added to iTunes, but we’re going to carry on like that,” he told The Telegraph. “For us it’s the best way. We are a band who started off with albums and that’s how we’ve always been.”

“We always were a band that if you heard something on the radio, well, that’s only three minutes. Usually the best tracks were on the albums.”

While on their traditional sound, which has rarely strayed from its original formula, frontman Brian Johnson remarked: “We don’t try to change and that strikes a chord. It’s just out and out rock and roll, that’s what we do. We’ve outlived quite a few fashions. We’re still playing what we always did which is good old rock and roll.”