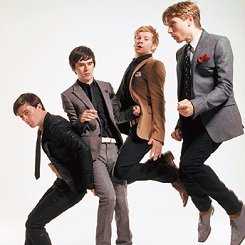 Franz Ferdinand plan to release their recent ‘Covers EP‘ on CD and digital formats next month.

The Scottish band originally released the five-track EP last weekend on 12″ vinyl as their contribution to this year’s UK Record Store Day, and will now issue the collection on the new formats on May 2nd through Domino Records.

Franz Ferdinand played their part in what has been confirmed as the most successful Record Store day since it was first put into practise in 2007. The likes of Foo Fighters, Radiohead and Gorillaz all enjoyed big sales as the initiative enjoyed a 20% rise in sales from last year.

Franz Ferdinand announced last year that work had begun on the follow to 2009’s ‘Tonight: Franz Ferdinand‘, though a release date for any new album is still to be confirmed.