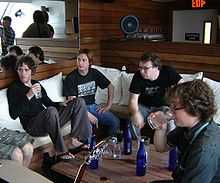 Indie five-piece Gomez will embark on a UK & Ireland tour from May, beginning with a warm-up show at Belfast’s Spring and Airbrake venue on the 21st.

The tour proper will commence on June 9th at Bournemouth’s O2 Academy, after which the band will visit cities including Bristol, Leeds and Manchester, before bringing the tour to a close at London’s Roundhouse on the 21st.

Gomez released their widely-acclaimed debut album ‘Bring It On‘ in April 1998, which triumphed over heavyweight records including The Verve‘s ‘Urban Hymns‘ and Pulp‘s ‘This Is Hardcore‘ to take home that year’s Mercury Music Prize. The debut would also land Gomez NME, Q and Brit Award nominations that year.

Five studio efforts have followed ‘Bring It On‘, the last of which, ‘A New Tide‘, was issued in 2009.

Tickets will go on sale from tomorrow (March 25th) at 9am.

MAY
Belfast Spring and Airbrake (21)