In today’s Soundbites, our weekly look at news, reviews and tabloid gossip, there’s the latest rumours surrounding this year’s Glastonbury headliners, Rihanna gets a touch upset with the BBC, and Fleet Foxes’ new track is featured. Elton John looks like he’s given an Apple exclusive and The Rolling Stones’ tour could be in jeopardy. 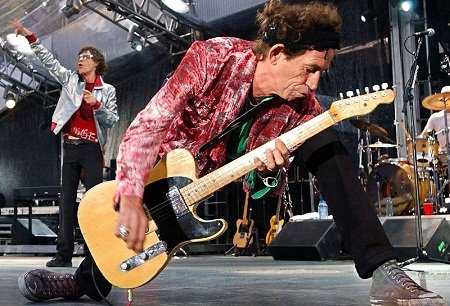 After being strongly-tipped as this year’s Glastonbury headliners for a good while now, the rumours suggesting U2, Coldplay and Beyonce will be appearing at Worthy Farm in June gathered pace this week after gossip website Holy Moly wrote: “How do we know?” the gossip site said. “Secrets. We thrive on them. In fact we actually lost a couple of our best informants simply bringing this news to you. They’re not dead though, we just stopped answering their calls.”

Pop superstar Rihanna isn’t happy with the BBC this week after the corporation’s Radio 1 station heavily edited her new track ‘S&M’ when it featured on the chart rundown last Sunday. Like any self-respecting celebrity, Rihanna took to Twitter to vent her fury to the world, writing: “Are you fucking kidding me??? I’m on it!”

When you have to sheepishly return to Facebook to inform fans that your new album actually isn’t finished after all, just a couple of days after telling the world otherwise, the signs are all there that things might not be going smoothly in the recording studio. However, if new track ‘Helplessness Blues‘ is anything to go by, the delays which affected Fleet Foxes‘ second album have done nothing to dampen the quality which made their eponymous debut such a well-received release. There’s no reinventing the wheel here; its all instantly recognisable Fleet Foxes, built on acoustics and harmonies, but when they’re already matching the quality of the debut, what’s the point of changing the formula? Download the track from their official website.

Elton John has suggested Apple are ready to unveil the latest iPad edition in a couple of months, after telling the The Telegraph he is looking to purchase one as soon as possible. “[Apple are] coming out with a Skype iPad in April and I’ve got to get one because I want to see my son when I’m not there,” he is said to have told the paper.

What a read Keith Richards‘ autobiography ‘Life‘ is. Beginning with a brilliant anecdote of a run-in with the local police in deepest Arkansas in 1975, the book never lets up as it entertainingly documents the eventful life of perhaps the greatest of exponent of the rock n roll lifestyle.

Speaking of Keith Richards and his new book, one UK tabloid today is claiming ‘personal’ revelations made by Richards against frontman Mick Jagger has put a planned 2011 Rolling Stones tour in doubt, as the pair are not on speaking terms, with a ‘source’ quoted as saying negotiations have been ‘difficult’ and ‘the prospect of touring in 2011 is looking bleaker and bleaker.’