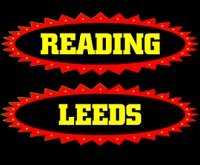 Melvin Benn, organiser of the Reading/Leeds festival, has revealed his three acts due to headline this summer will appear exclusively at the event in August.

Speaking to BBC Newsbeat, Benn described this year’s line up as ‘staggeringly good’, labelled the headliners as ‘extraordinary’, and claimed his three premiere bookings will not be appearing at another event during the UK summer festival season’s busy calendar.

The remark rules out the likes of Foo Fighters, Arctic Monkeys and Kasabian for Reading/Leeds, as they have already been confirmed headliners at different festivals over the course of the summer. With U2 and Coldplay still heavily linked to Glastonbury, The Strokes and Muse are listed as ‘strong rumours’ over at efestivals.

Later, Benn also confirmed the expected increase in ticket prices for 2011, and said they are likely to go on sale sometime in March in a bid to avoid the rush for London 2012 tickets.

Last year, Reading/Leeds made headlines by securing the return of The Libertines, while the twin festivals were also treated to brilliant headline performances by Arcade Fire.