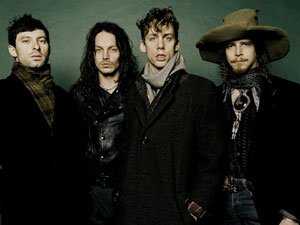 Razorlight have released a new portrait of the band today, with frontman Johnny Borrell apparently now the only remaining original band member.

The new photo has caused something of a stir on Twitter, and has been met with a bemused reaction by fans, with one describing the shot as the ‘Prats Of The Caribbean’.

Razorlight have now gone through several name changes since their breakthrough in 2003. Original drummer Christian Smith-Pancorvo departed the band not long after the release of debut ‘Up All Night‘, while his replacement Andy Burrows, who went on to become an integral member of the group, also left under a cloud in 2009.

Razorlight are due to make their live return as headliners at this year’s Guilfest, which will be held in Surrey this July. Their fourth studio album, the follow-up to 2008’s poorly received ‘Slipway Fires‘, has reportedly been recorded with producers Steve Lillywhite and Dave McCracken, and is due out later this year.