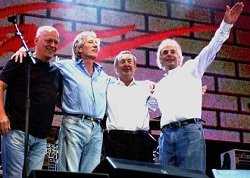 Pink Floyd have drawn a line under their legal disputes with EMI by signing a new five year contract with the industry giants.

The main point of conflict between the two parties centred around Pink Floyd’s opposition to EMI selling individual downloads of their tracks online, claiming the conditions of a deal agreed in 1999 prevented such actions.

Now, after winning the legal battle early last year, the rock supergroup have agreed a new contract, with the BBC reporting EMI have said: “All legal disputes between the band and the company have been settled as a result of this new deal. The deal will help the band reach new and existing fans through their incredible body of work.”

Meanwhile, EMI chief executive Roger Faxon spoke of his company’s delight at securing Pink Floyd, whom he describes as one of the most ‘influential bands of all time’. “Pink Floyd are one of the most important and influential bands of all time and I know I speak for everyone at EMI when I say that it is a privilege to have the opportunity to work with them,” he said.

Despite constant rumours, the surviving members of Pink Floyd continue to resist a full scale reunion following their successful performance at the Live 8 event back in 2005. Roger Waters is currently out on the road touring a re-imagined version of the band’s infamous The Wall tour.