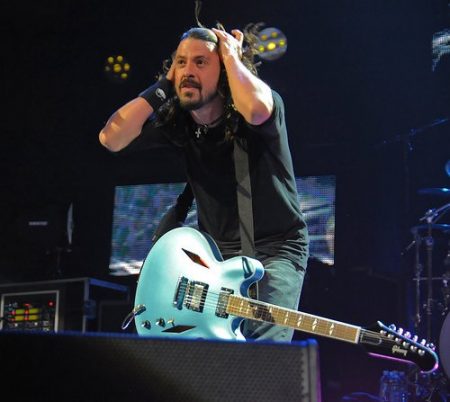 Grohl will pick up the NME Godlike Genius Award in person – and perform with Foo Fighters – at the exclusive Shockwaves NME Awards 2011 ceremony at the O2 Academy Brixton on Wednesday February 23rd.

“It’s really flattering and really good company to be in. It’s a nice thing to be acknowledge for doing something that you love to do, but in truth I don’t consider it a body of work because I don’t consider it work, I just consider it this incredible luxury that I get to play music and travel the world and feed my kids. It’s pretty great. Awards and lists can get silly sometimes but I’m very appreciative of this. It’s really cool to be called a godlike genius!”

From Nirvana to Foo Fighters; from heavy metal side-project Probot to drumming duties for Queens of the Stone Age and super group Them Crooked Vultures, Dave Grohl has never been far from NME’s headlines, establishing himself as a bona fide rock n roll genius.

NME editor Krissi Murison says: “An NME Godlike Genius is a very rare thing. To qualify, an artist must not only be a musical visionary, have an unparalleled legacy and a decade-spanning career, but also still be meaningful to young bands and music fans today. Whether it’s headlining the world’s greatest festivals, staging his own mega-gigs, releasing a series of hugely successful albums, collaborating with everyone from The Prodigy to Paul McCartney or still surprising fans with projects like Them Crooked Vultures, Dave Grohl is at the centre of everything interesting that is happening in music.

“But the Godlike Genius Award is no victory lap. It marks recognition of a stellar career thus far, and signals there’s a lot more to come. With a new Foo Fighters album, festival appearances and giant gigs around the globe booked this year, the NME is recognising an artist who is still in his ascendancy and one we confidently predict will dominate music for a long time yet.”