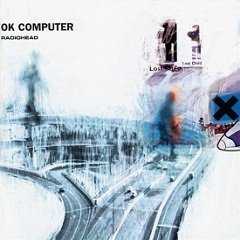 Radiohead‘s much lauded 1997 album ‘OK Computer‘ has been named ‘the best album of the past 25 years’ by a poll conducted by Q Magazine.

Three other Radiohead albums were voted into the top 20 by readers of Q, with ‘The Bends‘ at eight, ‘Kid A‘ placing at 18 and ‘In Rainbows‘ entering at 23. U2, Radiohead, Oasis and Muse have the largest number of records on the complete list of 250 albums which will be featured in the February edition of Q.

Commenting on ‘OK Computer‘, Paul Rees, Q’s editor-in-chief, said: “In the 13 years since its release, OK Computer’s appeal to Q and its readers has grown exponentially. We originally hailed it as a masterpiece and, a rarity this, that isn’t an opinion that we’ve even considered modifying ever since. As this readers’ poll testifies, our readers see it as the benchmark against which all other album are and continue to judged against in Q’s lifetime.”

Released in the June of 1997, ‘OK Computer‘ marks Radiohead’s move away from the more straight-forward rock of their early career, as they began their experimentation which has come to define them as a band.