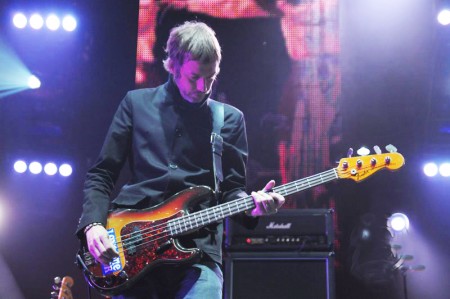 Andy was kind enough to give us some exclusive behind the scenes info on the progress of Beady Eye’s first album currently being produced and scheduled for release sometime next year.

He revealed that the recording of the Beady Eye album is complete with the mixing stage starting next week and also confirmed what Liam had stated in recent interviews: there will be 2 or 3 singles before the album is released next year.

Don’t expect to see Beady Eye live anytime soon though as they won’t hit the stage until the album is out. He said you can’t play a gig full of songs nobody has heard yet. Andy also gave us some insight regarding the songwriting distribution on the album. Liam has penned 5 songs for the record, Gem Archer and (Andy) contributed around 3 or 4 each.

The tracks on the album are a mixture of tunes that they had been working on over the years as well as new ones. Andy also confirmed that Liam will indeed be on lead vocals on every single song, but that Gem’s and (Andy’s) backing vocals are all over the album. He labeled the album pure pop music, but rock n’ roll at the same time.

Bell looked genuinely very excited, enthusiastic and proud of what they’ve recorded so far and is even looking forward to the next record. “Oh don’t worry, we’ve got loads of songs” he assured us.

Check back often for the very latest on Liam Gallagher’s new band and album.