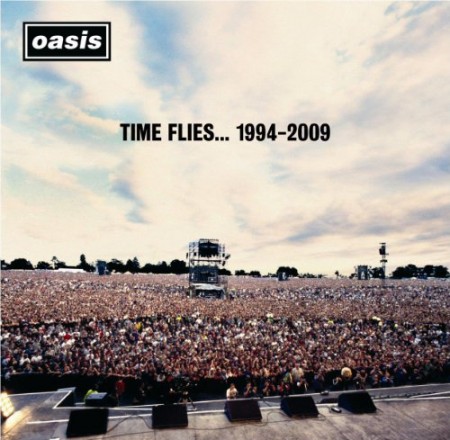 There was once a time when Oasis would put out a single every 3 months, a classic track backed with great B-sides, sometimes even better than its A-side. Who can forget the track listing of Cigarettes And Alcohol? Listen up, Fade Away and I Am The Walrus, you just wouldn’t dream of that happening today, not least with Oasis. 1994-1997 was a period when Noel Gallagher had the world in his hands. Anthem after anthem, there seemed to be no stopping him. You couldn’t avoid Oasis even if you tried, “What’s a Wonderwall anyway?” Fran Healy sang on Travis’ single ‘Writing To Reach You‘. Their songs had become part of the fabric in our society. As the title of their new single’s compilation rightfully suggests, Time Flies, and here we are celebrating their singles catalogue with a compilation that feels like the true marking of the end for Oasis.

Nearly a year on since their messy demise, and a reconciliation seems as far off as ever. Liam continues to push on with the rest of the remaining band members under new name ‘Beady Eye’ (at time of press it was still unconfirmed whether this was a wind up), and Noel’s slipped very comfortably back into ‘normal’ life, or whatever normal is for a multi-millionaire rock star. We’ve already had the ‘best of’ compilation back in 2006, ‘Stop The Clocks’, a collection of tracks handpicked by Noel which served its purpose as a glimpse into what Oasis were about for the untrained ear but did little to satisfy the long term followers due to the omission of certain tracks (Half The World Away over Rockin’ Chair? you’ve got to be joking). Now we’ve been served up a singles collection, ‘Time Flies 1994-2009‘, slightly cheesy title aside, this is an impressive body of work that reminds us what an unstoppable force Oasis once were.

One immediate observation you’ll probably make of this compilation is the order of the track listing, which is not chronological. The danger of doing it this way may have been opening the doors to critics who would say the album documents a decline in quality over the years. Noel said he wanted to put it together like a gig, but did also note that all the “iconic” songs would have been at the front had it been done by release date. I’d personally not have a problem with the album being chronological, as it would have been more of a journey for the listener, particularly for those who have followed the band since the beginning. So what if the second disc would be weaker than the first? it would be a much more organised and honest reflection of the bands career.

This release will do well to shine a spotlight on brilliant tracks that slipped under the radar and are overshadowed by earlier material that still dominates the radio airwaves today. The anthemic Hindu Times, the psychedelic trip of Go Let It Out, the stomping live favourite, Lyla, and one of the finest pop songs of recent years, The Importance Of Being Idle – many bands today would kill to write songs half as good as these. It would be fair to say that in recent years Oasis became more of a singles band, but a bloody good one at that.

The artwork for Time Flies is a striking, monumental image of the crowd at their career peaking Knebworth gigs in 1996. Bonehead still reckons they should have just called it a day that weekend, but moments on this album such as the adrenalin pumping Shock Of The Lightning, the rediculously cool swagger of D’You Know What I Mean, and the modern classic Falling Down make it seem worthwhile holding it together that bit longer, not to mention some of the historic gigs that followed it. Finsbury Park, anyone?

If you love Oasis, you’ll have all of these songs already but will probably buy it for your collection. This is for anyone whose heard the occasional Oasis song on the radio but has never bothered to pull their finger out and explore the bands catalogue beyond Morning Glory. There’s a wealth of greatness in this band’s history that no compilation could ever truly do justice, but this comes close.