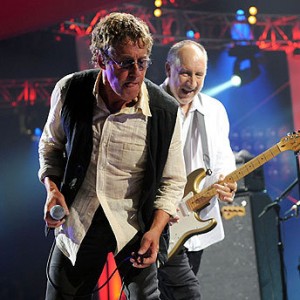 As ever, Roger Daltrey and Pete Townshend were joined on drums by Zak Starkey, while Pete’s brother Simon Townshend featured on guitar and Pino Palladino played bass. It is the first time Roger and Pete have performed ‘Quadrophenia‘ since the Nineties, and Daltrey is reported to have told nme.com this will be the last time they ever perform the landmark album.

The band were joined by Pearl Jam frontman Eddie Vedder during ‘The Punk and The Godfather‘, before he returned with Kasabian lead singer Tom Meighan for a rendition of ‘I’ve Had Enough‘.

This year’s Teenage Cancer Trust event, which is celebrating it’s 10th anniversary, has also seen performances from the likes of Noel Gallagher, Arctic Monkeys and Them Crooked Vultures.

Tags:Kasabian, pearl jam, the who