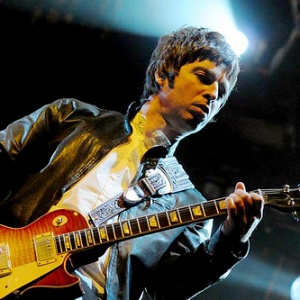 Noel Gallagher made his first public appearance since leaving Oasis tonight (25th) at London’s Royal Albert Hall, playing a set packed with classics from his back catalogue.

Appearing in support of the Teenage Cancer Trust charity, Noel was joined principally by Terry Kirkbride and his former bandmate Gem Archer, as he was during his acoustic tour in 2006, putting to bed rumours of a full band rift after he left Oasis last August citing a lack of support from his bandmates as one of the reasons for his departure.

In a set similar to his previous acoustic shows, Noel opened with early b-side ‘(It’s Good) To Be Free‘, and was first joined by the Crouch End Festival Chorus on ‘Cast No Shadow‘. Later, Wired Strings joined the choir for a memorable rendition of ‘Don’t Go Away‘ and a clutch of other early classics including ‘Sad Song‘ and ‘Listen Up‘ followed. Fans were also treated to some rarely heard tracks, as Noel pulled out the b-side ‘Rockin Chair‘ for it’s first live airing since the mid-90s, which was followed by a surprise rendition of ‘Definitely Maybe‘ album track ‘Digsy’s Dinner‘. After being on stage for close to 90 minutes, the show was rounded off with ‘The Masterplan‘ and 1996 hit single ‘Don’t Look Back In Anger‘.

Noel will return for a second show at the Royal Albert Hall tomorrow night.