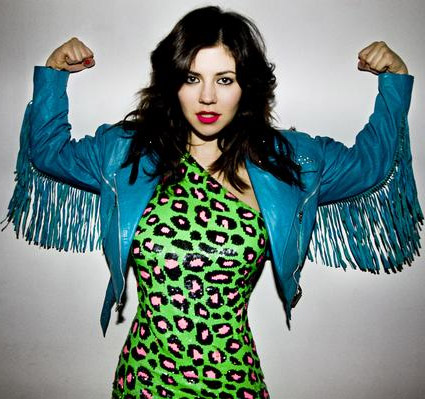 Lady Gaga‘s album ‘The Fame‘ has ended TV show Glee’s short stop at the top of the Album Chart this week, while Marina Lambrini Diamandis, a.k.a Marina & The Diamonds (photo), has debuted at #5 with her new record ‘The Family Jewels’. The latest in Johnny Cash‘s series of ‘American’ albums – ‘Aint No Grave‘ – has landed at #9. The record, which is made up from tracks recorded during the same sessions as those which made up his previous ‘American’ album, was released three days before what would have been the legendary songwriter’s 78th birthday. American singer Jason Derulo is this week’s no.1 in the Singles chart with his track ‘In My Head‘.

In the Indie Album Chart, American rockers Alkaline Trio have entered at #3 with their seventh studio album ‘This Addiction‘, while The Temper Trap, The xx and Vampire Weekend all remain in the top 10. Dizzee Rascal‘s album ‘Tongue N Cheek‘ is this week’s no.1 for a second week.