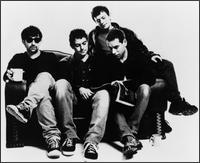 Popular Britpop band The Lightning Seeds have announced details of a UK tour to take place in April. The Liverpool band released the album ‘Four Winds‘ last May, their first in over ten years.