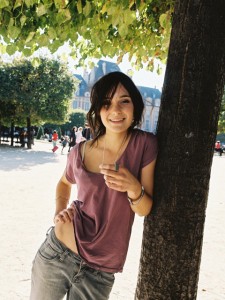 Earlier this year, Lisa released her debut single ‘Neopolitan Dreams’, a track which was also widely known as featuring on the Surf washing powder advert. It has become an internet phenomenon having already received 1.7millon plays on Myspace, 800,000 plays on Youtube and selling over 20,000 copies in the UK alone. The track also received healthy radio support from Jo Whiley on Radio 1, Dermot O’Leary on Radio 2 and Jon Kennedy on XFM.

‘Coin Laundry’, the follow-up single to ‘Neopolitan Dreams’, is a quirky and unique sounding single with gorgeous, endearing vocals that you cannot get out of your head. It sounds like what the result would be of collaboration between Bat For Lashes and Regina Spektor with production by M.I.A. It is a track that most definitely leaves you only wanting to hear more of the rare, exciting talent that is Lisa Mitchell.

The video, directed by Vanessa Caswill who also directed ‘Neopolitan Dreams’, sums up the track perfectly; it is wonderfully magical with a sweet, funny tone and features Lisa living inside a washing machine getting out only to charmingly follow her love interest (fellow singer/songwriter Johnny Flynn) around the launderette, except she is invisible to him.

These two tracks are just a taste of what is to come from Lisa Mitchell. She will release her debut album ‘Wonder’ in October, on which she has worked with singer/songwriter Ed Harcourt, former Longpigs frontman Crispin Hunt and Australian band Evermore, amongst others. Whilst inhabiting a magical musical world of her own, Lisa’s candy-coated folk pop with an often dark heart noticeably embodies the tenderness of Laura Marling, the wordplay of Regina Spektor and Feist’s free spirit.

Born in England to a Scottish father, Lisa moved to Australia at three years old and made it her home. She grew up in something of a musical timewarp, grateful to her father for raising her on Bob Dylan, Cat Stevens and Van Morrison, all the while finding obsessions of her own, like Bright Eyes or The Killers.

She recently performed packed out headline London shows, along with appearing at Glastonbury and Hard Rock Calling, and is currently touring the UK as support to Newton Faulkner before embarking on her own UK tour in November. Dates as follows;