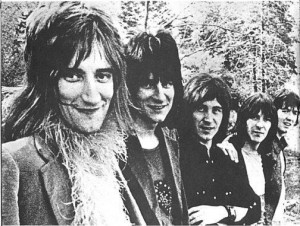 Legendary UK band the Faces are set for a reunion gig in London next month – without frontman Rod Stewart.

The BBC reports that Ronnie Wood, Ian McLagen and Kenny Jones will get together to play at the Royal Albert Hall on October 25. The show will be in aid of the Performing Right Society’s Music Members’ Benevolent Fund and will also feature Simply Red’s Mick Hucknall, former Spice Girl Mel C and Kiki Dee.

There were no statements by Ronnie Wood regarding Stewart’s absence, but he did mention the late band member Ronnie Lane. “This will be so special for us, staging a reunion for such a wonderful and prestigious event,” he said. “Sadly Ronnie Lane can’t be with us, but I’m sure he will be there in spirit, God bless him.”

The Faces formed back in 1969 but split up only 6 years later.

For more info on the reunion visit Prsformusicfund.com

Video of the Faces performing live in Paris, 1971 :