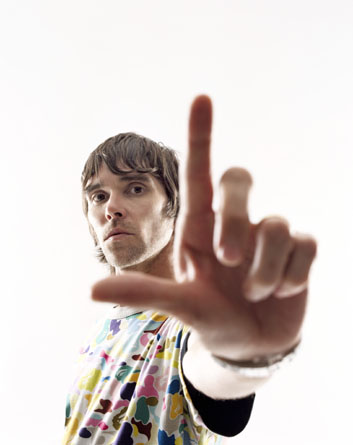 Rumours are rife that Liam is ready to continue working on Oasis projects without his brother, while Noel is widely expected to release a long-awaited debut solo album some time in the future.

Brown told the Press Association: “What’s a shame is that they’re brothers. From being ten and six scrapping on the carpet in the front room, now they are doing it in public and worldwide – I think that’s a bit of a shame for them. Life’s hard enough without scrapping with your brother when you’re a grown man. I would say go solo. I can heartily recommend it. It’s a fine way to be.”

Brown also commented on the praise the Gallaghers heaped upon his former band The Stone Roses when they first burst onto the music scene in 1994: “I always loved Oasis because when they came out, they did express that they loved us and they saw that we did it and they thought they could do it too. We’re lads like they are, and that inspired them. That means a lot to me.”

Ian Brown has enjoyed a successful solo career since the disintegration of The Stone Roses in 1996, and will release his sixth solo album, ‘My Way’, on September 28th.

(Ian Brown featuring Noel Gallagher on Guitar ” Keep what you got”)