Home
Features
Noel vs Liam – The War That Defined Oasis 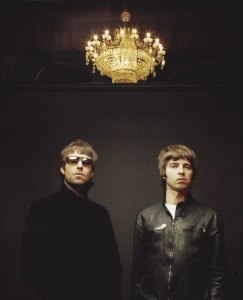 It was August 1991 when Noel Gallagher, back in Manchester after a stint working as a roadie for the Inspiral Carpets, went to see his younger brother’s new band for the first time. As he would recall years later, “fucking cheers mate” was his thought as he saw Liam Gallagher fronting a band and looking to forge his own way into the music world. Noel’s status as globe trotting roadie was in danger of being over-shadowed. The spotlight which he so desired was now being sought by Liam as well.

It was the start of the rivalry which would come to define Oasis.

It was apparent from the start that Liam was well aware of the talents and virtues of Noel. The very act of asking him to join, no matter how much he might have tried to downplay it since, shows he knew immediately that having Noel on board was an opportunity not to be turned down. But it also meant giving up control of the band; another action which went along way to starting the burning inter-band conflict between the siblings.

Also, Noel’s acceptance and insistence on becoming leader was an obvious sign that he desired to be superior right from the start. The awkward, unofficial positions of the two had sown the seeds of a rivalry which would last for the best part of twenty years.

To begin with, all was well. The brothers were united in a desire to escape from the city in which they had grown up, and to create a new life for themselves. Along with Paul Arthurs, Paul McGuigan and Tony McCarroll, they would rehearse religiously and play any gig they could. Hugely committed to the band, their passion would materialise on stage, where they impressed all who saw them with a rare power and intensity, irrespective of the size of the crowd. It was clear the fire that was burning inside Liam and Noel was powering Oasis on to inevitable success. It had already become an integral part of the group.

When they landed a record deal two years later, the clashes of personality and ideology began to become more apparent, as Noel combined his own excesses with a determination to drive the band on to boundless heights, while his brother in turn embraced all that a band on the road offers, embodying the rock and roll lifestyle, yet also beginning to lose sight of the underlying importance of music and gigs.

The first real display of strife came when Liam and Guigsy were detained on an overnight ferry heading to Amsterdam. With Noel tucked up in bed, his fellow band members got into a scrap with other passengers, something Noel learned of the the next morning. He found his own plans being interrupted by his brother’s antics –  a scenario which would be played out many times during the intervening years.

Not long after, Noel abandoned Oasis for the first time. After a disastrous gig in LA in September 1994, he walked, heading off to San Francisco in the middle of the night, apparently with the full intention of leaving the band not long after they had begun to breakthrough in the UK. However, he was persuaded to rejoin after being tracked down by Creation man Tim Abbott, and after a short stay in Las Vegas, Noel returned and was leading once again.

By 1996, Noel’s songwriting and fierce commitment to the band, coupled with Liam’s emergence as the most dynamic, passionate frontman since Johnny Rotten, had propelled Oasis to super-stardom in Europe. Once more though, Gallagher Sr. was left to pick up the pieces after Liam pulled out of a planned MTV Unplugged appearance just moments before he was due to go on stage. Noel completed the gig, but his patience was being stretched to breaking point.

As their second album ‘(What’s The Story) Morning Glory?‘ began to make waves in the US on the back of the worldwide hit ‘Wonderwall‘, the band were booked for a tour of the States in August 1996. However, Liam had other plans, and moments before they were due to board the plane, he turned away, apparently needing to “sort his house out” with new bride Patsy Kensit. Once again, these were actions Noel interpreted as selfishness, and the ever increasing bitterness between the brothers began to be played out more and more in the press as interest hit fever pitch. It was a tension which undoubtedly helped to make Oasis what it was; the biggest band Britain had seen since The Beatles.

After Liam’s about-turn at the airport, Noel continued without him, but when Liam rejoined a few weeks later, Noel’s patience had been stretched to breaking point and he walked away for the second time in two years. Not long after generation-defining gigs at Knebworth, Noel was gone with the clear intention of not returning. Return he did though, and not only did the band continue the tour, they found themselves back in the studio shortly after.

In 1999, the future of Oasis was in doubt. Paul ‘Bonehead’ Arthurs had announced his departure not long into sessions for a new album, and was soon followed by bassist Paul ‘Guigsy’ McGuigan. With the troubles that the brothers had suffered during the past few years, it was unclear whether the pair would be able to pull together and guide Oasis through this transitional period. However, their mutual passion for the band shone through, they vowed to continue, recruiting new members Andy Bell and Gem Archer to fulfill a world tour that had been booked to support ‘Standing On The Shoulder Of Giants’.

Once on the road, trouble flared once again between the Gallaghers. After the band were forced to cancel a gig in Barcelona in 2000 due to an injury to drummer Alan White, a night was spent drinking in the dressing room. Insults were traded and after another punch up, Noel walked yet again. The rumoured reasons for the fight were the first public sign that the sibling rivalry had moved on from the petty squabbling and differences of two young brothers to more personal attacks which would eventually drive them apart. After the now infamous events of Barcelona, Liam soldiered on, remaining European dates fulfilled with stand-in guitarist Matt Deighton.

Yet again, Noel returned, apparently duty-bound to new members Archer and Bell to record a new album. A 2000 summer UK stadium tour, with Noel back on board, was completed, and a return to the studio a year later was on.

2005 was perhaps the strongest year for the Gallaghers since 1996. With a number one album that had in turn spawned two UK no.1 singles, they hit the road for their biggest world tour to date, including huge US shows at venues such as Madison Square Garden and the Hollywood Bowl. The tour passed off without incident, and relations between the two seemed to be healthier than ever.

However, when the band reconvened in the studio to begin a follow up in 2007, it wasn’t long before Liam was again apparently putting personal commitments ahead of the group, at least in Noel’s eyes. Leaving the studio to marry his long-time girlfriend Nicole Appleton, plans to record a couple of tracks for the album were interrupted, one of which Noel said had been eyed up as a potential future single. The remaining members were forced to record different tracks without their frontman, and being forced change his schedule to suit Liam yet again seems to have finally pushed Noel close to the edge.

The resulting tour was disappointing. Sories of separate hotels, dressing rooms and tour buses indicate a whole new level of antagonism between the pair, one that was only working against the band. The only communication between the brothers seemed to be via Noel’s tour blog ‘Tales From The Middle Of Nowhere’ and Liam’s Twitter account. Frankly, it was all rather embarrassing and the feeling that all the animosity, which now seemed to be bordering on hatred, was becoming too much, too counter-productive, was hard to ignore. Eventually, all the pent-up emotion exploded on Saturday night in Paris with another dressing room brawl, resulting in Noel announcing his departure from the band for the fourth time. But was it the right decision?

One thing is clear, Oasis wouldn’t have functioned, or at least to the extent they once did, without the two brothers on board. However, the past 18 months has revealed a rivalry between Liam and Noel Gallagher that was no longer working in the best interests of the band, quite the opposite. It’s one thing not communicating on tour, but once in the studio (and if Oasis were to continue as a viable entity they would have had to record eventually) all members need to be speaking and on the same page. Warring in the studio is only going to stifle creativity, and the last thing Oasis deserved was to carry on simply as a money-making touring machine. It would have been excruciating for the antics that have been played out on the ‘Dig Out Your Soul Tour’ to have been repeated again and again on subsequent tours.

So, if the tension and rivalry which was once the driving force behind the band was now only damaging it, then Noel is right to walk away. Certainly the online squabbling between the two since Oasis went back on the road in 2008 is a million miles away from the impassioned tension of the twenty-somethings who managed to captivate the public so much so that a recording of their argument ‘Wibling Rivaly‘ charted in 1994.

Will Oasis carry on without Noel? Can they? It’s by no means unprecedented for a band to carry on after the departure of a major member, and even go on to new heights. Pink Floyd managed it, as did The Rolling Stones. However, rarely has one man been so integral to the success and direction of a band as Noel Gallagher in Oasis, and carrying on without him, even for the greatest frontman of his generation, would surely only further weaken Liam’s position in what for many has already been a fairly one-sided argument.

Team Noel or Team Liam? Let us know which side you’re on by leaving your thoughts below.